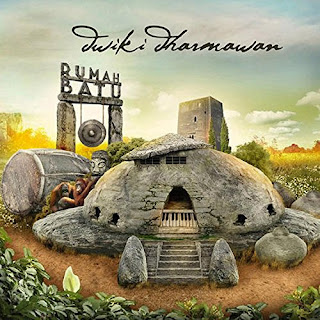 Pianist Dwiki Dharmawan quickly follows up his 2016 critically acclaimed album “Pasar Klewer” with a brand new release titled “Rumah Batu.” As his music continues to grow and expand, Dwiki’s music is a wonder to behold. His new 8-song release begins with the 10-minute adventure piece “Rintak Rebana.” The songs allows the entire band to get involved as the song continues to shift in tempo and style, from world music to rock to jazz. He follows that up with the nearly 12-minute epic piano piece “Paris Barntai,” as its time for Dkiki Dharmawan to showcase his skills. The shortest piece on his new album is the 6-minute, atmospheric soundscape “Janger.” It feels as if you are floating across the plains and mountains of the world. Dwiki finishes his new album with the wonderful jazz groove of “Samarkano” and the enlightening, Middle-Eastern sound of “Selamatkan Orang Utan.” To find out more about Dwiki Dharmawan and his latest release “Rumah Batu,” please visit dwikidharmawan-moonjune.bandcamp.com.

Brazilian progressive rock band Dialeto recently released its first live album titled “Live With David Cross.” World re-known violinist David Cross (King Crimson) gives an extra dimension to the band’s music as the album was recorded on their most recent tour in 2017. The show took place in their home country of Brazil, as Dialeto was promoting their latest studio album “Bartok In Rock.” The new 13-track album begins with a trio of Dialeto’s “Romanian Folk Dances” as Cross and guitarist Nelson Coelho trade solos on the song’s build-up. The steady rhythm section of Fred Barley (drums) and Gabriel Costa (bass) keep the excitement and energy flowing through “Mikrokosmos.”

The second half of the disc features a mix of original songs from David Cross and songs from his time in King Crimson as heavy rockers like “Tonk” and “Larks Tongues In Aspic Part II” showcase the full force of the band. The night closes with a stunning 11-minute version of Crimson’s “Starless” as the band are on point, displaying such emotion in their performance. To find out more about Dialeto “Live With David Cross,” please visit dialeto.org.